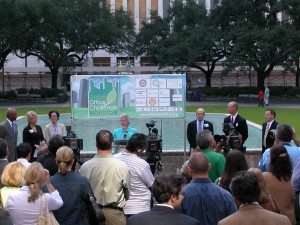 I attended the official launch of the City of Houston’s Green Office Challenge today at City Hall. There has been a tremendous amount of press about this, so I won’t add much. Here is the Chronicle’s story: http://www.chron.com/disp/story.mpl/business/energy/7203038.html 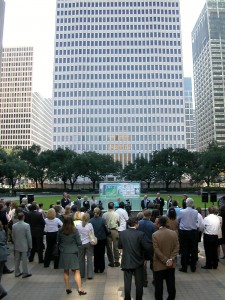 I will encourage you to join. Whether you are a building owner or a tenant, the Challenge has much to offer!

The mayor did mention that Houston was ranked number 8 in the number of LEED buildings. I wondered where she got those numbers as I felt that had us ranked too low. But I looked at the USGBC data I had organized a while back and realized that I had us ranked 8th as well. We fare much better when you measure in terms of square footage certified – there we are 3rd. I’ll post those numbers (which are 3 months old!) in a separate post. And I’ll explain the problems and difficulties with comparisons / rankings like this. Plus, I’ll update the numbers and see if we’ve gained any ground. I know we’ve hung a lot of plaques locally in the last 3 months. Did we move up?