Houston released its first ever Climate Action Plan today, the 50th anniversary of Earth Day. Some two plus years in the making, the Climate Action Plan fulfills part of the city’s commitment to the Paris Agreement with the goal of carbon neutrality by 2050. 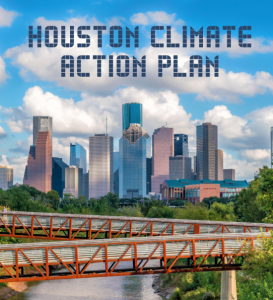 The Plan consists of twelve major goals in four focus areas: transportation, energy transition, building optimization, and materials management. I served on the Building Optimization working group, developing the goals for that focus area. The Plan does an excellent job at capturing the essence of our strategies. Not everything the working groups discussed could be included, but the Plan offers tangible, achievable goals that will intensify over time as initial goals are successful. It will truly serve as a living document, evolving as we get closer to 2050. 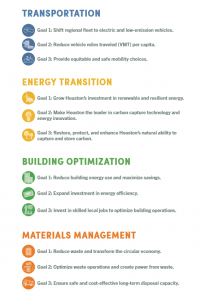 Many of Houston’s current successes are noted as springboards to the new, more ambitious goals. The city’s press release cites the city reducing municipal emissions by 37% since 2005; Houston being the number one municipal user of renewable energy that powers 92% of its municipal facilities; Houston being a member of the C40; and Mayor Turner co-chairing the Climate Mayors. The Climate Plan also highlights some little-known stories, such as the Anheuser-Busch plant being powered by gas generated from the McCarty Landfill. And that pumping and treating water and wastewater uses 68% of the city’s electricity budget. The Climate Plan dovetails very well into the recently released Houston Resiliency Plan, acknowledging that climate change has had incredibly negative impacts on Houston.

In addition to dozens of volunteers that comprised the working groups, the Houston Advanced Research Center and C40 provided technical support and funding was provided by CenterPoint Energy and the Jacob & Terese Hershey Foundation. The Climate Action Plan goes before the Houston City Council’s Quality of Life Committee on May 27.