In September 2018, NOAA is expected to release the Texas volume of its Atlas 14 project. Atlas 14 is a national update of historical rainfall data that began with the Southwestern US in 2004. Originally scheduled to be published last year, the Texas volume was delayed to include data on Hurricane Harvey rainfall and that preliminary data has now been released. The rainfall definition of a 100-year storm for all the Houston-Galveston region has increased significantly. For some areas of Harris County, a 100-year storm will now be defined as 18 inches in 24 hours, an increase of up to seven inches per 24 hours from previous rainfall data (Technical Paper 40 originally published in 1963). NOAA cautions not to use this data for design purposes as it preliminary. FEMA will use the finalized rainfall data to create new flood plain maps, redefining our 100-year and 500-year flood plains, similar to revisions made by the TSARP project after Tropical Storm Allision. The Houston Advanced Research Center has a larger summary of the Atlas 14 progress and Hurricane Harvey impacts on their blog: http://www.harcresearch.org/feature/NOAA_Atlas_14_Updated_Rainfall_Data_Underscore_Challenges_of_Managing# 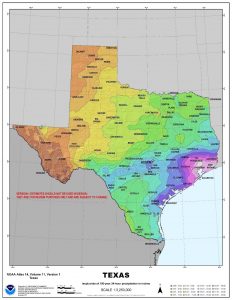 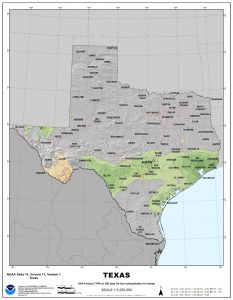