This week we celebrate the ten year anniversary of the City of Houston’s LEED resolution and look at the impact it has had. On June 23, 2004, the City of Houston passed resolution 2004-15 “Authorizing the City to establish the USGBC’s LEED Certification as a standard for new or replacement facilities and major renovation of City of Houston owned buildings and facilities with more than 10,000 square feet of occupied space.”  The resolution was passed unanimously by City Council and signed by Mayor Bill White.

I recall the tempered enthusiasm for the resolution. There was excitement that the City committed to green building, but there was disappointment that it was only a resolution and not a binding ordinance. The city cast a wide net by including all projects of 10,000 square feet and larger, but the city had excluded the Airport System, one of the biggest builders under the municipal umbrella. Plus there was language such as “to the greatest extent practical” and “minimizing up-front project cost” that gave the City an out. But Houston finally had a Green Building policy. And looking back, it was a positive early step on a fruitful journey.

When the resolution was signed, Houston had zero municipal projects registered and zero municipal projects certified. In the private sector, there were only 13 LEED registered projects and four LEED certified projects. Momentum started slowly. The first city-owned project to register for LEED was the Downtown Fire Station No. 8 in 2005. The first city-owned project to earn certification was the Looscan Branch Library in 2008. 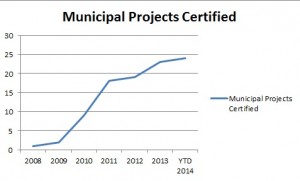 But the resolution worked. With promotion by the General Services Department, the City has embraced LEED. As of June 2014, the City boasts 24 LEED certified municipal projects with another nine projects pursuing LEED certification. The private sector’s use of LEED has exploded right along with the City. As of June 2014, there are 333 total LEED certified projects in the City limits and some 524 registered projects pursuing certification. And one of those LEED registered projects is the Bush Intercontinental Terminal D Improvements project, so even the airport system has joined the party!