On the morning of September 22, 2013, the 1947 art-deco Foley’s (Macy’s since 2006) Building, once known as the most modern department store in the U.S., was reduced to rubble. My office has the fortune to be only two blocks away and positioned perfectly for viewing the implosion. The office held “The End of An Era” Implosion Party on that early Sunday morning. 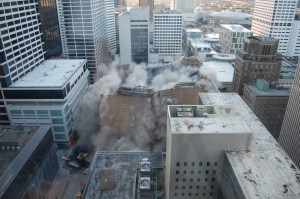 A 2012 study done by the National Trust for Historic Preservation titled, “The Greenest Building: Quantifying the Environmental Value of Building Reuse” gives stark evidence of that. Citing the US Department of Energy claim that new construction claims 48% of all material resources consumed in the USA, the report examined several life cycle stages of different building types in four varied climates: Phoenix, Portland, Atlanta and Atlanta. The study assumes that a new building built would last 75 years and use average energy use for that building type.
Using the IMPACT 2002+ Life Cycle Impact Assessment, the results were that it was almost always less harmful to reuse an existing building than build a new one. The only exception was a warehouse to residential conversion because the materials input were so similar to new construction. 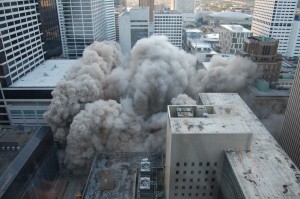 Other building types and their corresponding year of “carbon equivalency”:

Preferring the term “Avoided Impact” rather than “Embodied Energy”, the study also revealed that it will take 35-50 years for a new home to recover the carbon expended on construction.
And despite all of this evidence, the Brookings Institute states that we will demolish 27% of all existing buildings within the next 25 years.
To see the full report, go to: www.preservationnation.org/greenlab 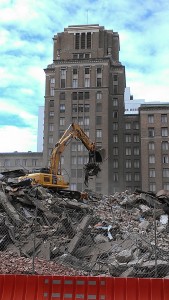 The Foley’s Building was the third structure on that block. Originally, large Victorian homes graced it. Next, one of Houston’s best buildings ever stood there for only 16 short years; the 1928 San Jacinto Trust Building. Its entrance was a quick study of Texas history with a mission-style façade topped with a mural of Houston’s history. Sloane Gallery has great photos of it online.

Replacing Foley’s will be the 24-story, 500,000 s.f. Hilcorp Building, slated for opening in 2015. Will it last the 25 to 42 years to offset the carbon lost in that dusty implosion one early Sunday morning? Or will the cycle continue?